Ellie was gifted with a Tuffy toy when my friend Karen came to visit many months ago.  I decided not to give it to Ellie just yet as she was definitely in her I-want-to-chew-everything-I-can phase.  And now that she’s 9 months, and for the most part, knows what’s “her’s”, I decided to see if Ellie would like to play with it, and how it holds up.

Advertised as a tough toy for a medium to large dog with seams sewn multiple times to prevent it being easily destroyed, I was intrigued to see if it will actually last more than 10 minutes.  Proof of what happens normally with a stuffed toy: 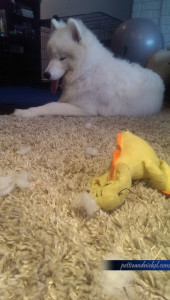 So tentatively Ellie sniffs Emery as I give it to her.  And then Ellie puts it in her mouth and shakes it like a prey ensuring its death.  Repeatedly. Then she went on to chew on it. 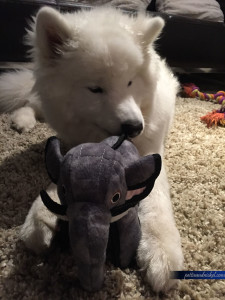 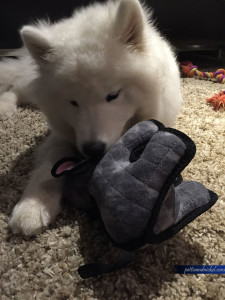 I inspected it after 5 minutes of Ellie playing with it, and lo and behold, still intact.  All except the tail.  The tail is 2 fabric sewn by a little thread. that was about to be chewed off. So I cut it off with scissors.  Good to go again.

Happy to report after an entire night, Emery the Elephant is still good! 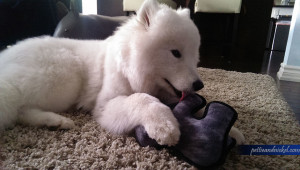 Not bad at all. To this day, (it’s been about 2 weeks), the Tuffy toy is still solid! (with some wear and tear).  Apparently there is a sheep and a penguin to be had…maybe christmas present for Ellie? 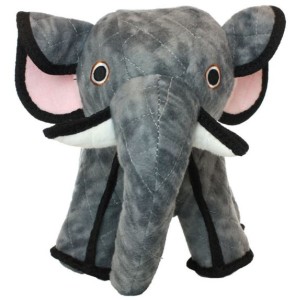